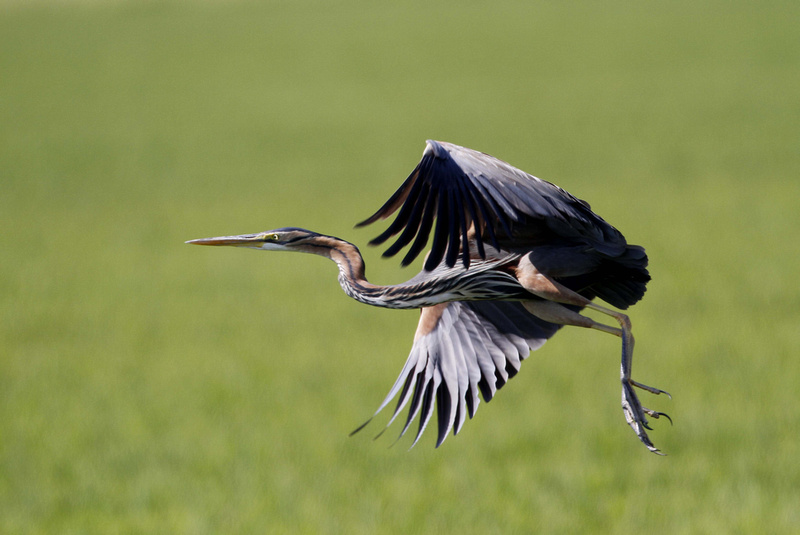 A real change of scene today, heading inland to the steppe type habitat near Lleida, about a two hour drive to the north from La Senia via the C-12, in the hope of picking up Little Bustard, Roller, Great Spotted Cuckoo, Lesser Grey Shrike, Pin-tailed Sandgrouse, etc.

Set off at dawn, weather again looked to be decent. 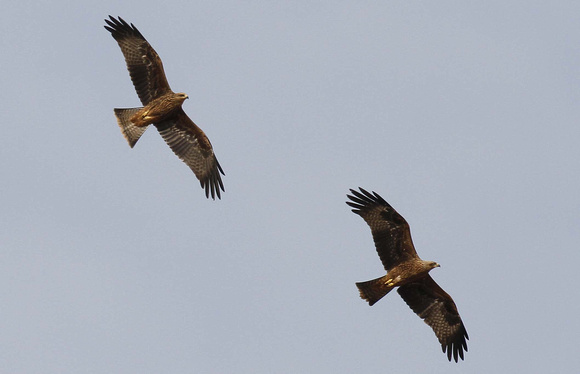 Just past Alfes when I was due to turn right towards the Aerodrome, a few Black Kites were seen to the left, so took a detour in that direction. Parked up, then walked up a mound to get a better view - at times the kites came really close, giving a great opportunity for flight photography. Looked like there was a refuse tip in the distance to the north-west, and this also gave my only sighting of White Stork for the trip.

At the base of the mound, two recently fledged Crested Lark found which were pretty confiding.

Spent a surprising amount of time on the detour, loosing over an hour, before finally crossing over to the fields to the east of the C-12 and onto the Alfes Drylands. No real plan apart from driving around the various tracks, and just seeing what I came across. 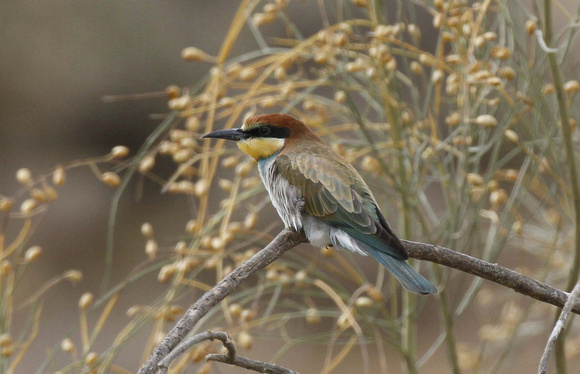 A good start with a probable male Lesser Kestrel, but that was lost to view over a brow of a hill before I could be 100% of the ID, and attempts to relocate it failed. Parties of Bee-eater gave great views at times, and it was nice to actually get them perched on natural vegetation for a change. Thekla Lark also seen early on.

Explored the area around the Aerodrome, but struggled to pick up anything of interest, and was fairly disappointing with none of the target species found. Not sure if I was just missing birds that were there, or if at this time of year, they were keeping a lower profile. Moved on exploring the tracks that criss crossed the fields, and finally had a change of luck, with a couple of Pin-tailed Sandgrouse picked up, and as a bonus they were within range of the camera for record shots. 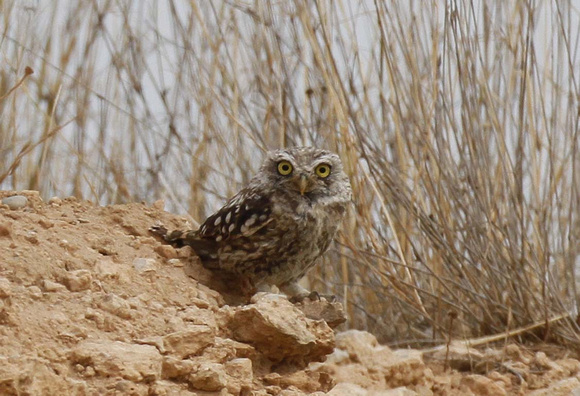 Not long after found a Little Owl, but by now I was starting to struggle with fine dust which was stinging my eyes, so took the decision to move on from the drylands, and explore the villages further east .

First stop was Aspa to have a look for Black Wheatear amongst the rocky outcrops, but no joy - did have my first Red-rumped Swallow here though. 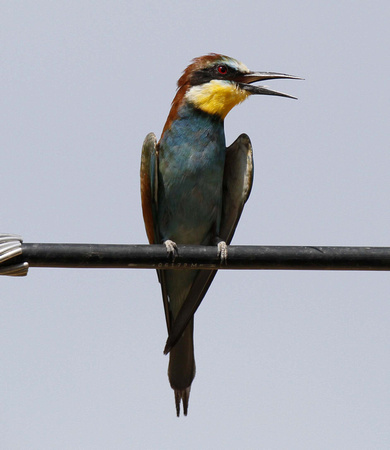 Explored the roads between Aspa and Castelldans but was tough going in the heat, and even the birds were struggling, with the Bee-eaters sat out on wires panting. Hard work today.

Up at a reasonably early time, then started to get sorted for the visit up to the vulture feeding station at Valderrobres, which was expected to be one of the highlights of the trip. Located on the north side of the Els Ports mountains, as the vulture flies it was only 17 miles away from La Senia, but with the hotel to the south of the mountains, it meant having to circumnavigate the range by road via Tortosa, resulting in a 55 miles journey of an hour and a quarter by car.

Weather conditions were looking good, and the light for photography was excellent. Best bird on the way was the male Montagu's Harrier, virtually in the same location as 1st August, and again being flushed from the road itself.

The plan was to meet up in Valderrobres at 9.00am, from where everyone would set off in convoy to the observatory. Arrived in plenty of time, and sat outside the meeting point having a pleasant coffee chatting to a holidaying English couple who were also booked on it (first time in a week I'd had a face to face conversation in English). Setting off to the feeding station, it soon became apparent why I wasn't able to find my way there two days previous - it basically involved a climb through forest on tracks, impossible unless someone was showing you the way. 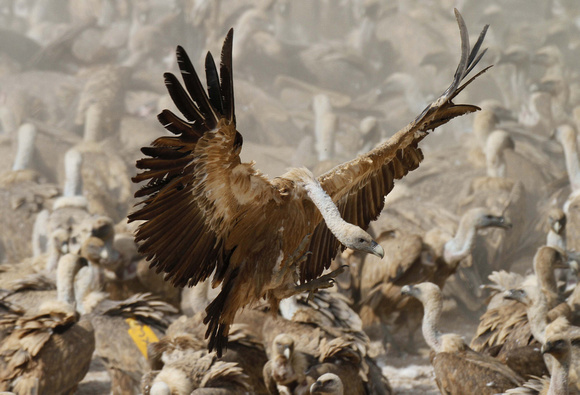 Once parked up it was 100 metre or so walk through trees to the observatory - en route Griffon Vultures were already circling overhead, and it was worth getting a few photos from the off.

In the building, viewing was through glass unless you paid extra (total cost was 20 Euros), in which case you could do photography via a curtain screen. Facing south into the sun wasn't ideal, so it was a case of mostly trying to shoot to the left or right (the link for the Mas de Bunyol website is at the bottom of the trip report, and it now appears that there are bespoke hides available for photographers, so it's probably much improved compared to 2011 when my visit was made - the downside is it looks as though you have to be there from 6.00am). 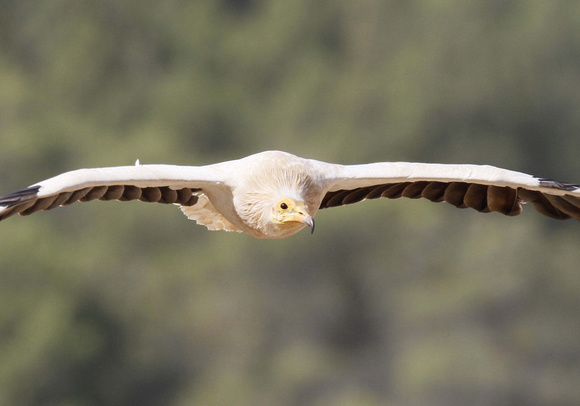 With everyone seated, a wheelbarrow full of dead rabbits from the adjacent rabbit farm was brought through onto the open area in front of the observatory. Masses of vultures were now in the area, maybe 200+ Griffons with just the odd Egyptians mixed in, and as I'd already got some decent photos of Griffon Vulture earlier, the main aim today was to try and get some images of Egyptian Vulture. Views of both species over the next twenty to thirty minutes were superb, giving amply opportunity for good quality photos, and it was well worth the money and effort in coming. 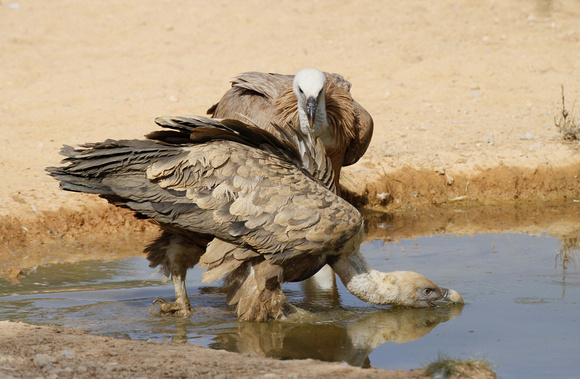 Not seen today, but occasionally they do get Black Vulture here as well.

Trying now to fill in the gaps before the trip ends - either birds I'd missed or else ones I wanted to get better shots of. Having finished at the feeding station, decided to head back to the Ebro Delta, to see if I could get better images of Kentish Plover on El Trabucador. 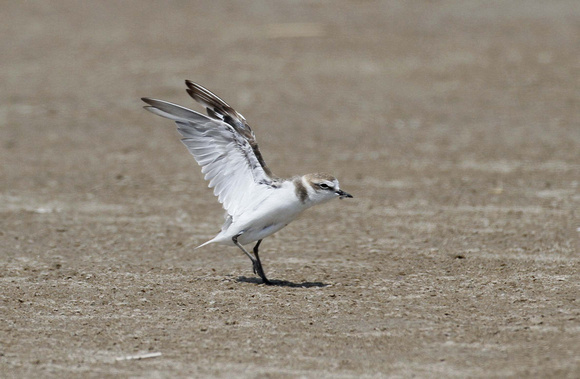 Didn't take too long on good quality roads getting back to the delta, and was there by midday. Managed to find two loose flocks of maybe 25-30 plovers. Not sure if it was just me, but I found this species to be really flighty, even using the car as a hide - additional photos taken, but not sure it was worth the effort, especially as the hire car nearly got grounded on the soft sand off the main track. Very little contrast between the birds and the sandy background, so the cameras focussing system struggled to get sharp shots. 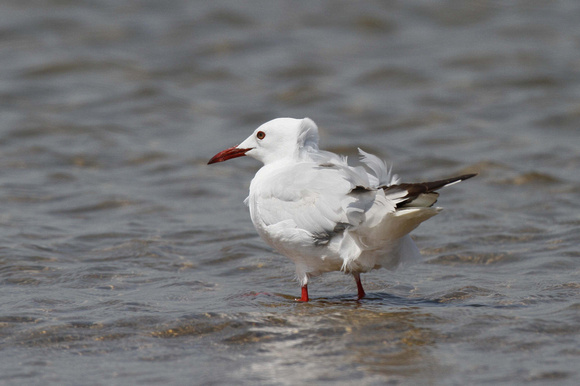 Still getting great views of both Audouin's and Slender-Billed Gulls, and much easier to photograph. Gulls aren't to everyones taste, but these were definitely two of my favourite species of the trip.

I'd previously passed the entrance to the SEO reserve at Riet Vell, near to the Eucaliptus urbanization, on numerous occasions without actually going in. Decided to finally give it a go - what a great place, one of my favourite sites for photography, and a real shame I'd left it so late to visit. Unlike other viewpoints and towers, which were fine for viewing, but too distant for photography, this one had a hide overlooking the reed beds and associated pools at close range. It also had the added bonus of the hide being perfectly positioned light wise. 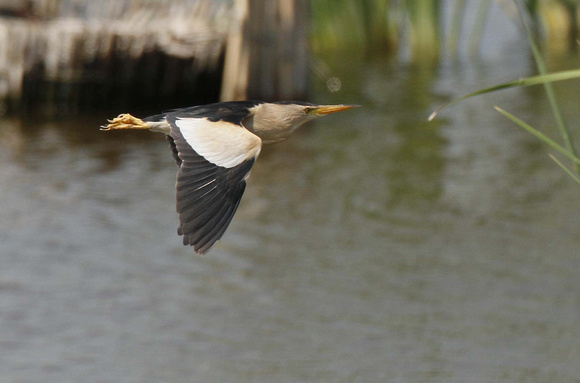 Main highlight on the reserve was the frequent views of Little Bittern, usually in flight, occasionally perched distantly, and it looked as though they were breeding somewhere reasonably close to the hide. Additional birds on the reserve included around three Great White Egret, Great Reed Warbler, plus my only sighting of Penduline Tit.

One species I hadn't seen so far, which I'd hoped would have been at Riet Vell, was Purple Gallinule. As I was leaving tomorrow, this became a priority, and a visit to the mirador at Gola de Migjon this evening solved the problem, with four or five birds present. Too distant for photography, but at least I'd managed to see them, which was a relief.

Last day. Checked out of hotel in La Senia at about 7.30am. A fairly new building, with air conditioning, clean, comfortable and cheap for the facilities at around £35 per night for a double en suite room. The only proviso is whether the location suites - it's way off the tourist track and on the downside it's a 45 mile round trip to Amposta on fast roads, so a bit distant for covering the Ebro Delta, but on the plus side it's handily placed to exploring the southern side of the Els Ports mountain range.

Being out in the sticks, language was a problem staying in this area rather than on the coastal strip. Unfortunately I don't speak Spanish, so it was a case of bundling through somehow.

Did ponder a return visit today to Valderrobres to have another photography session with the vultures, but thought better of it and opted to have an easier day staying relatively local, gradually drifting back in the direction of the airport at Reus. 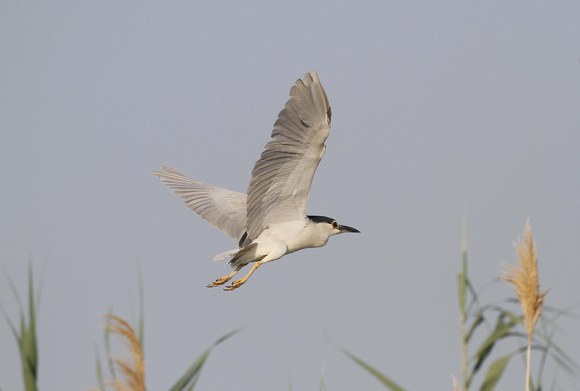 The drive to Amposta was typically productive, with the usual species of Woodchat Shrike and Hoopoe on show. A juvenile Montagu's Harrier was seen hunting over rough ground adjacent to the TP 311, before drifted off over the olive groves (possible the same bird seen a couple of days earlier, in the same area). Stuck it out for 45 minutes in the hope of it returning, but with no further sign gave up - consolation was a flyover group of 4+ Bee-eater, plus yet more Woodchat Shrike feeding young. 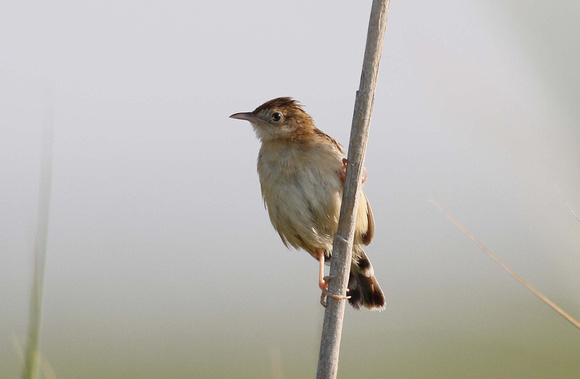 Onto the Ebro Delta, first stop was the Night Heron roost in better light - birds were still around, but typically views weren't as good as the previous visit in dull conditions. Common Sandpiper was on the track, plus a Kingfisher in flight up and down the waterway. By far the highlight was Fan-tailed Warbler - dread to think how many I'd seen over the previous week, but this was the first one to finally sit up for the camera.

Next port of call was a return visit to Riet Vell in an attempt to improve on my Little Bittern photos. Thought it had potential for photography, and it proved to be the case today. 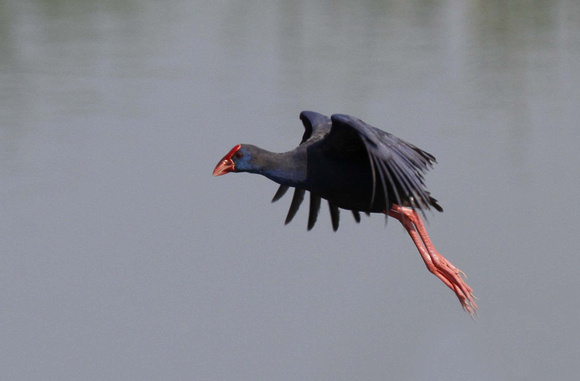 One of the first birds seen on the reserve was a Purple Gallinule, close enough for a couple of semi-decent records shots including in flight - pity it hadn't shown yesterday as it would have saved the additional trip to Gola de Migjon. 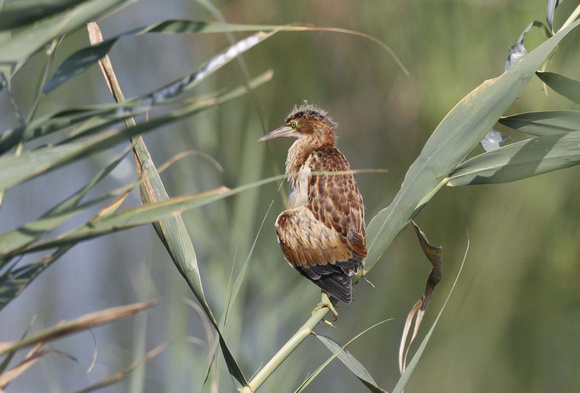 Was still getting various views on and off of Little Bittern. Some movement in the reeds in front of the hide merited further investigation, and a change of seating position further away, but at a better angle, revealed a youngster of that species, which proceeded to climb higher, eventually into full view. Movement elsewhere in the reeds indicated that there were maybe an additional two young. 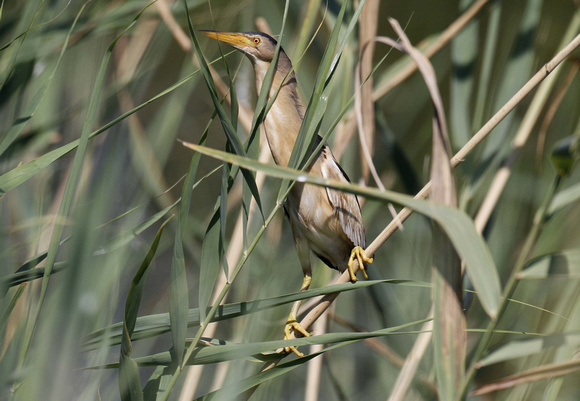 Decided to stick it out to try and get some photos of the adult Little Bitterns, and now knowing the rough area the youngsters were in, that proved to be pretty straightforward. 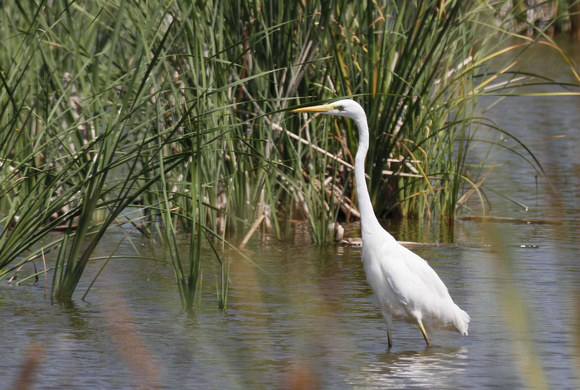 Four Great White Egrets on the reserve today, and this was the only place I'd seen them close enough to photograph. Various individuals had been seen around the paddyfields and larger lagoons, but tended to be distant. Great views here, and they probably would have come even closer to the hide had it not been for the dive bombing Common Tern, which were nesting on the rafts and protecting their youngsters.

Time was up, so the drive back to Reus Airport for the flight back to Liverpool. That left on time, and with the aircraft less crowded than the journey to Spain, a more pleasant experience.